My husband and I have a curious and energetic 21 month-old — and a house that is decidedly not baby proof (although in all fairness, I’ve never been in a space that was truly “baby proofed” for him). As soon as he was mobile, we knew we needed to create a “Yes Zone” for him — a space where everything is a “Yes, go for it!” instead of a “No, don’t touch that!”

Originally, we contained him by setting up Supergates in our breakfast nook, but I don’t recommend these. They didn’t exactly match my aesthetic, and our little guy kept outgrowing the space, so we had to keep adding more gates. Eventually, he was strong enough to actually move the gated area to wherever he wanted — and on one particularly terrifying morning, my husband discovered that in a matter of minutes, our boy had actually moved his gates several feet over and had plucked a sharpie and kitchen sheers off of the breakfast table (fortunately, he wasn’t hurt!!).

A quick look at our original set up: 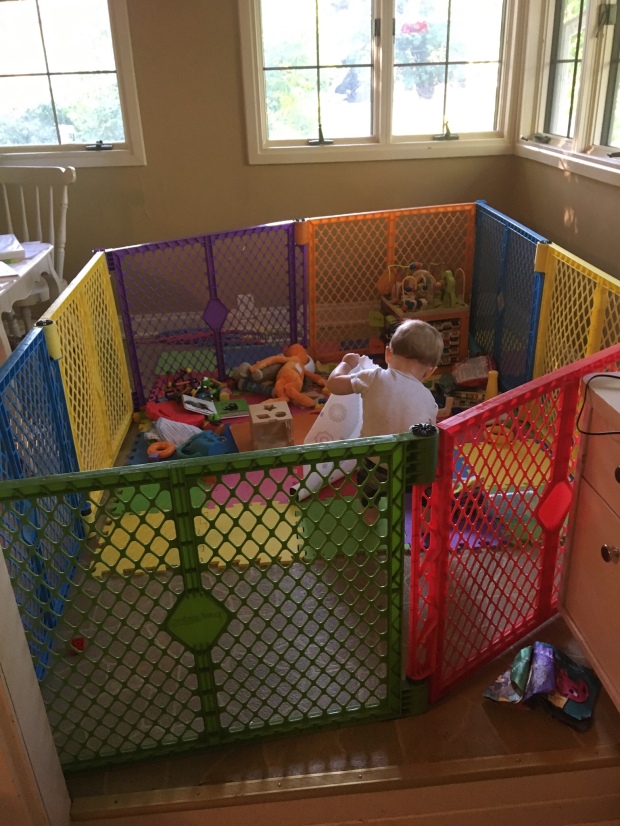 So my husband had the brilliant idea of temporarily converting our entire breakfast nook into an actual playroom for him. Eventually, I would like to eventually reclaim the space as a casual eating area (I love the idea of cozy built-in benches!), but we do have a dining room as well as a small kitchen island with barstools, so we really don’t need third eating area for now.

The great advantage of using a breakfast nook as a playroom is its location — you can keep an eye on your little one as he plays and simultaneously get some work done in the kitchen! Our laundry room is also right off the kitchen with a clear view of “The Fort” (as we call it), so sometimes I can even squeeze in a little laundry if I manage to get him absorbed in an activity (he loves “cooking” in his kitchen!). 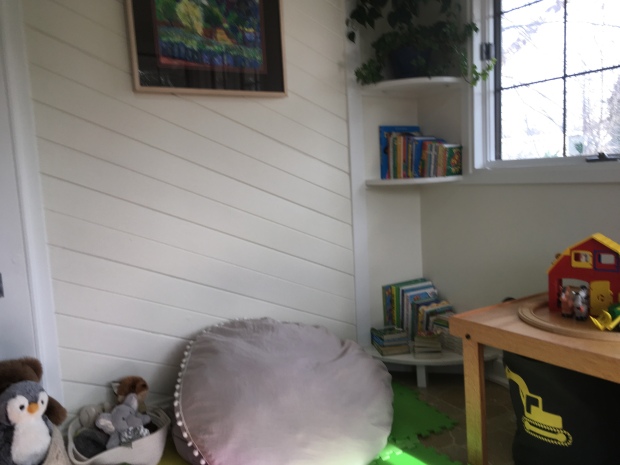 To convert the breakfast nook into a play room, my husband made some DIY shaker style baby gates for a grand total of $60. Didn’t they turn out great?! They match the original 5-paneled doors that we have through our craftsman bungalow. We painted them in the same colors as the rest of our kitchen (Sherwin Williams Dover White and Sherwin Williams Extra White) so they blend in seamlessly. 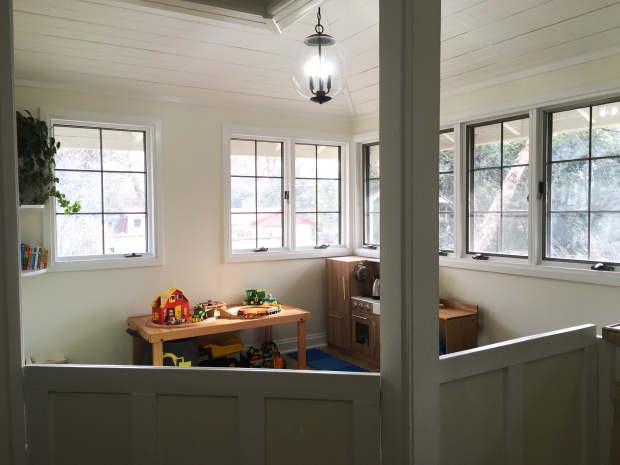 Do you have any unconventional solutions for a playroom?

Also, if you’re interested in a tutorial for the baby gates, let me know in the comments below!

If you’re new around here,  I’m Molly.  I’m a freelance orchestral musician loving life in North Carolina with my husband, who is also a freelance musician, and our beautiful baby boy.  Thanks for stopping by!